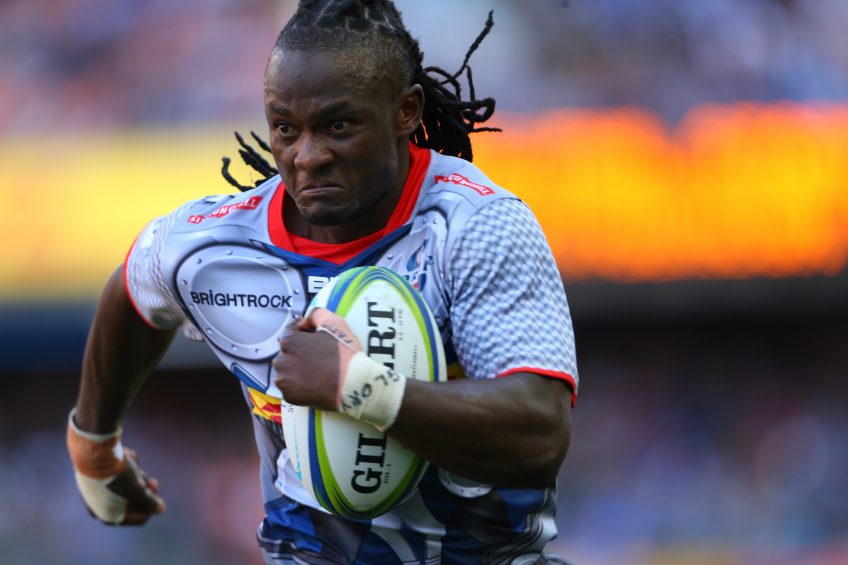 The Springboks, the South African national rugby team, are the current world champions. You will constantly be reminded of this on your visit, so you are forewarned.  Rugby fans are some of the most passionate of fans and their allegiance to their team is ardent. Historically Western Province, or WP as they affectionally known, have been one of the strongest teams in South Africa domestic rugby. While every game here is played at a frantic pace, the games against the Blue Bulls from Pretoria are renowned for being intense gladiatorial spectacles with a thrilling atmosphere.  Playing from same ground is the international Super League team, The Stormers. The only Cape based franchise The Stormers regularly have epic battles against the best teams from Australia,  New Zealand, Argentina and Japan in what is seen as the most pre-eminent club rugby tournament in the world. Super Rugby games are generally sell outs, so booking in advance is advised. 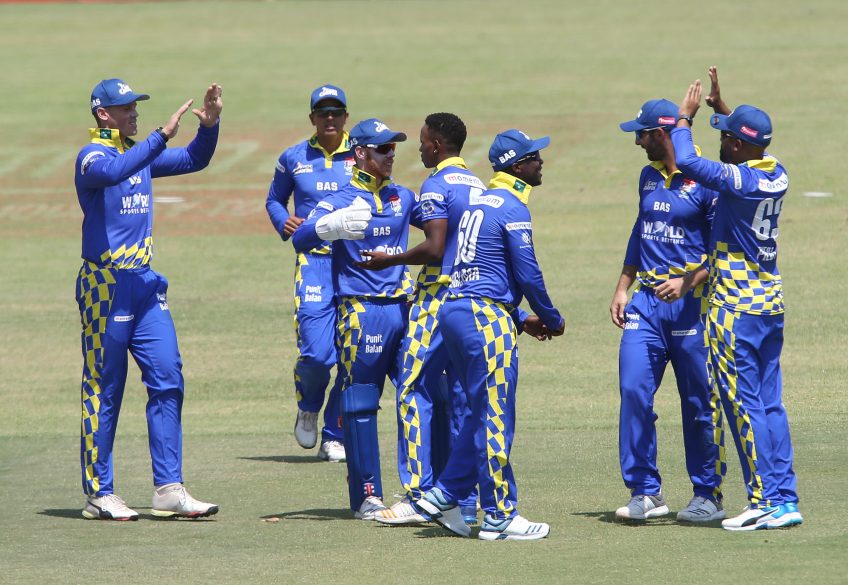 “I don’t like cricket, I love it” is 10cc’s take on cricket loving Jamaica and in certain circles in Cape Town, cricket is held in the same regard. Cricket is often seen globally as the Marmite of sports, you either love it or hate in. In Cape Town however it has transcended that divide, with a more wide spread fan base, especially in the short form versions of the game. The day nighters have become somewhat of a rite of passage for students in Cape Town were going to cricket is as much of a social occasion as a sporting one.  Newlands, the home of the Cape Cobras, is the most beautifully located cricket ground in the world, situated in the leafy Southern Suburbs with a magnificent mountain backdrop, the view alone is worth the visit.  Depending on your mood you can time your visit to experience either the leisurely four day tactical game, the fast and furious one dayer or a nail biting 20/20 game.  You can also chose from a traditional stand seat or pack a picnic and your own camping chair and chill on the grassy banks. As parking is a premium around what is essentially a residential area, it is strongly advisable to get an uber or a taxi to the ground. 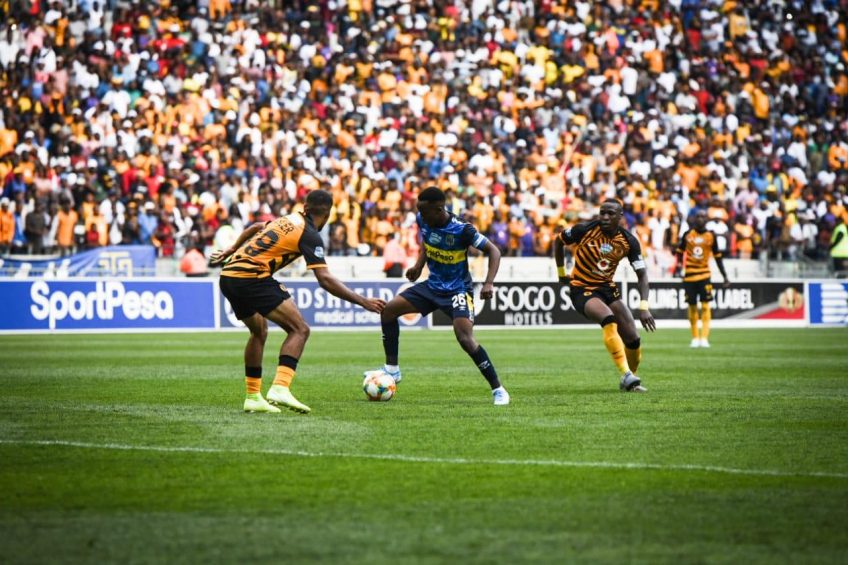 Although you would never know it, based on the perennially under achieving national team - Bafana Bafana, football is South Africa’s most popular sport. With over five million people playing regularly it’s miles ahead of all other sports in terms of participation. While the shadow of the Soweto giants, Kaizer Chiefs and Orlando Pirates looms large over South African soccer, the new kid on the block Cape Town City FC is threatening to usurp that dominance. Borrowing heavily from international trends this slick branded club brings some pizzazz to the park.  The club is marketed as both fan focused and family friendly and you will often find three generations of the same family soaking up The Gees. Gees is Afrikaans for spirt and trust me you’ll know it when you feel it.  This family friendly environment is cemented by the fact that Cape Town City play their home games at the spectacular Cape Town Stadium. Situated right next door to a delightful urban park as well as the restaurant and cafe packed Greenpoint strip, the stadium has great transport links and is perfect for a day out in Cape Town. 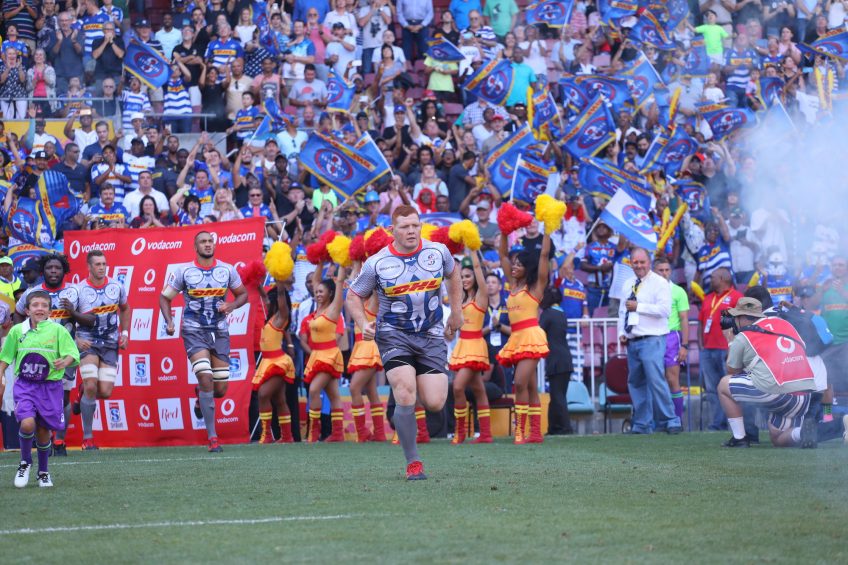 South Africans are sports mad and Cape Town is no different. From the golf courses of Constantia to the dusty fields of Langa, you will find locals enthusiastically getting their own sporting fix across the city. This extends to spectators; if you can kick it, throw it, race it, hit it or jump over it, you’ll find a willing audience in Cape Town. South Africans are also fiercely patriotic when it comes to their sport stars who are celebrated with gusto and a complete disregard for impartiality on match days. Of course after the match is over, this is replaced by good natured banter as braais are lit and the beers start to flow. There is considerable good natured rivalry between Cape based clubs and those based up country which always makes for an electric atmosphere in the citadels of sport in Cape Town. Cape Town is blessed with some of the best sporting arenas in the world, many of which are bucket list for serious sports fans. This week we have chosen three match day experiences that offer both excellent sporting days out and a very friendly welcome to neutrals. 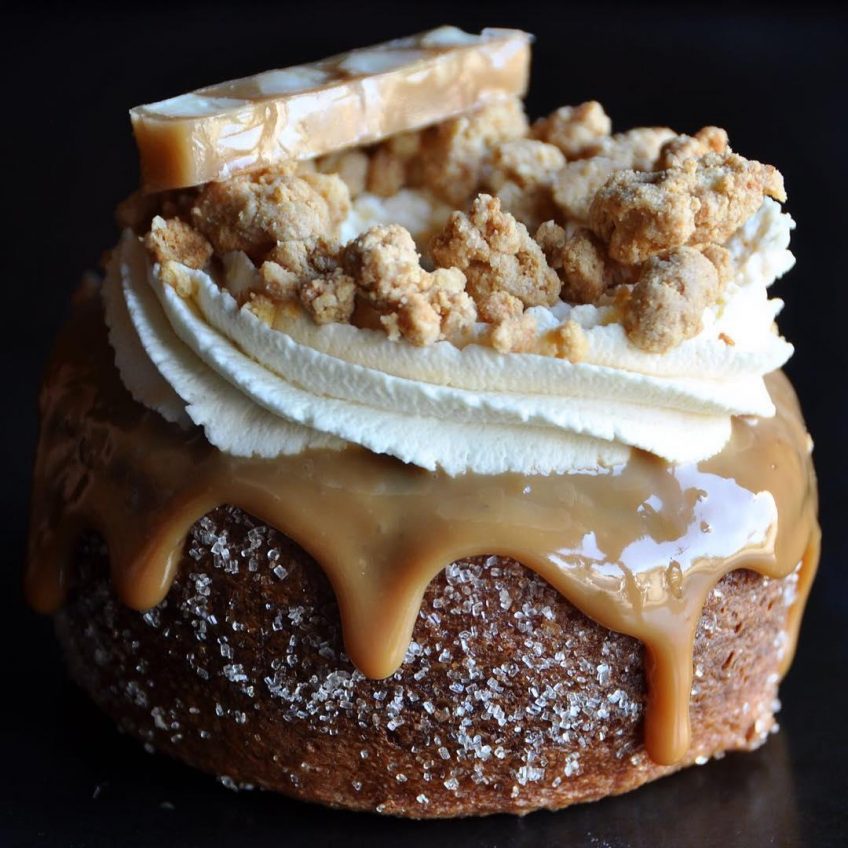 As Agent Cooper knows, nothing can be so life affirming as a perfectly baked piece of pie. People have been known to travel miles just to taste the wares of a baker that has mastered the art of perfect baking. In Cape Town this destination bakery is Jason Bakery. Jason Bakery takes its baking seriously, with all their ingredients ethically, free range, organically minded and sustainably sourced to ensure quality throughout the in-house production process. Fresh is at the forefront of their ethos, they bake daily and all leftovers are donated to a local charity at the end of the day.  What started as a hole in the wall take-away has evolved into three fully fledged cafes offering organic wholesome breakfasts, sandwiches and salads along with their now legendary pastries.  While their savoury pastries are delightfully moreish it’s with their confectionary and sweet delights that they really shine.  From blueberry danishes to grandma’s white chocolate chip brownies to carrot cake cheesecake the menu is designed for temptation. Though their pièce de résistance is the Doughssant. The Doughssant is a croissant-filled doughnut hybrid pastry that tastes way better than it sounds. Each week the flavour changes, it can be anything from the whacky. The Elvis Presley - peanut butter, banana and caramel, to the sublime. The Vovo filled with a white chocolate & coconut custard & cherry jam, topped with white chocolate & cherry ganache, vanilla marshmallow & an iced Vovo biscuit. Doughssants are only available on Saturdays and they so popular most people order them in advance. 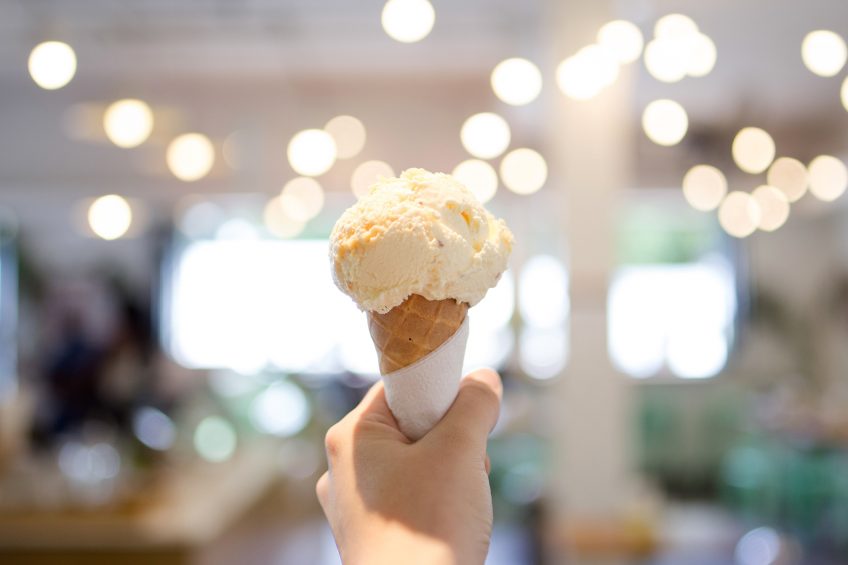 Nothing screams summertime like fresh ice cream straight off the cone.  And when it comes to fresh nothing comes fresher than The Creamery’s range of made from scratch ice creams. Using locally sourced natural ingredients and suppliers that are both ethical and environmentally conscious they make honest to goodness ice cream that tastes as good as it looks. They have a flavour range to entice even the most discerning of palettes. Their classic favours include  65% Chocolate, Sea Salt Caramel and Rosetta Roastery Coffee. While their seasonal range can include such decadent delights as Blackberry Cheesecake, Apricot Jam Alley and Yellow Nectarine.  They’re a great local success story. What started at market stalls has now grown, in a few short years, to brick and mortar cafes, while still remaining true to their market stall roots with guest appearances at markets across Cape Town. Their unique offering has seen them featured on Masterchef as an example of the best in artisanal ice cream making. The cafes have an extended desert menu with waffles and a banana spit sundae that is simply divine.

Honest Chocolate is what is says on the box, honest and to a fault. Meticulously hand crafted and using only traditional methods, their whole chocolate making process from bean to bar is undertaken in-house.  They source only organically grown African ingredients that adhere to strict ethical and environmental standards. Their cacao is sourced from Tanzania through Kokoa Kamili  who work exclusively with small scale famers and who are committed to community upliftment and sustainable development. The chocolate itself is enchanting, ranging from the purist 80% Raw to more uniquely South African flavours like Kalahari Salt or Naartjie.  They also have seasonal experimental flavours with exquisite wrappers designed by local artists that would make for the perfect gift. In addition to chocolate bars they produce bonbons, cacao nibs, hot chocolate and chocolate spread all made with the same hand crafted attention to detail.

Honest Chocolate also has its own cafe, suitably called The Honest Chocolate Cafe that provides coffees, teas and of course hot chocolates as well as a selection of chocolate truffles, tarts and cakes. In the evening if you feeling even a little more decadent they have a secret gin bar in the courtyard stocked with the ideal libations to chase your chocolate with. 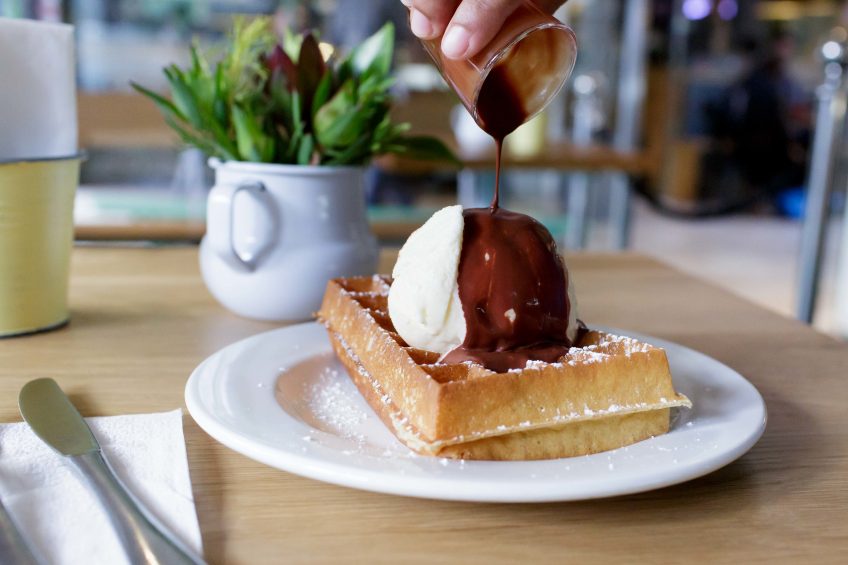 “Where there is cake, there is hope. And there is always cake.”

Sweet dreams are made of these, is the refrain of the legendary 80s pop stars Eurythmics, who claim to have traveled the world and the seven seas, looking for something sweet. They clearly must have bypassed Cape Town, as if they had alighted in the port of Cape Town, they would have been presented with a cornucopia of sweet delights that would have surely ended their quest.  Early visitors to the Cape would have had their taste buds tantalised with such goodies as Melktart, a crusty and creamy, custard like filled tart and Koeksisters which are super sweet fried dough pieces immersed in syrup or honey. While these delicacies are still readily available across Cape Town, there is so much more sweet temptations on offer in Cape Town today than was on offer for the sailors of yore. The cross cultural melting pot that makes up present day Cape Town has seen a mushrooming of dessert focused establishments that cater for even the most discerning of sweet tooth devotees. This week we have chosen three home-grown flavour merchants that will send your taste buds to seventh heaven. 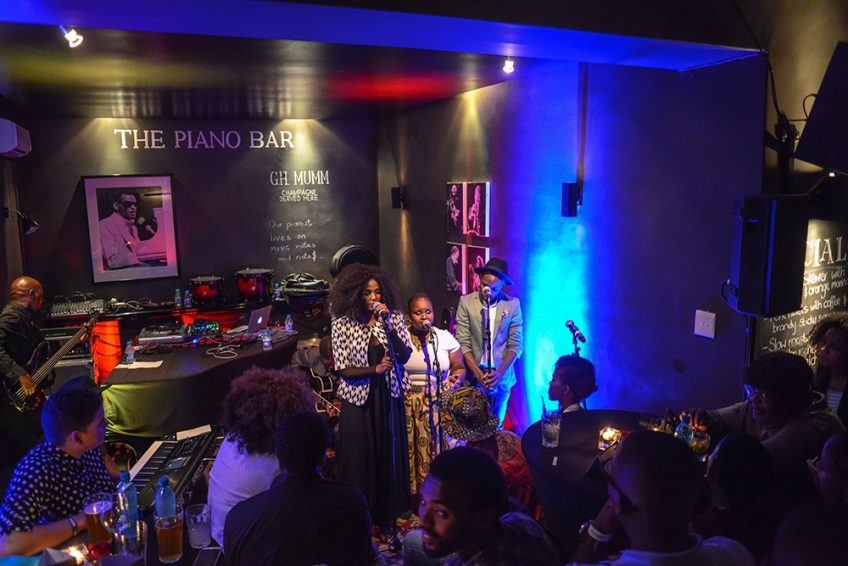 If your music tastes slide towards the more slick, sophisticated side of the spectrum then the stylish Piano Bar is perfect for your music fix. From crooner standards to jazzy vibes the venue swings to the more intimate and revue style with its entertainment offering.  Often rising the tempo the venue play’s host to artists not afraid to play with genre as they entice the audience to groove.  You can expect anything from jazz, R&B, Motown, cabaret, soul and even some funk and house from their roster of international class professional musicals.  The venue itself is a trendy urban eatery with a menu designed for company, with tapas and sharing boards as well as specials. Its fabulous wrap around balcony makes the most of its urban location giving the space an almost New Orleans in summer time feel. In summer, if you feeling really decadent, head upstairs to the Sky Bar in the same venue for cocktails next to the rooftop pool with stunning views of Table Mountain. 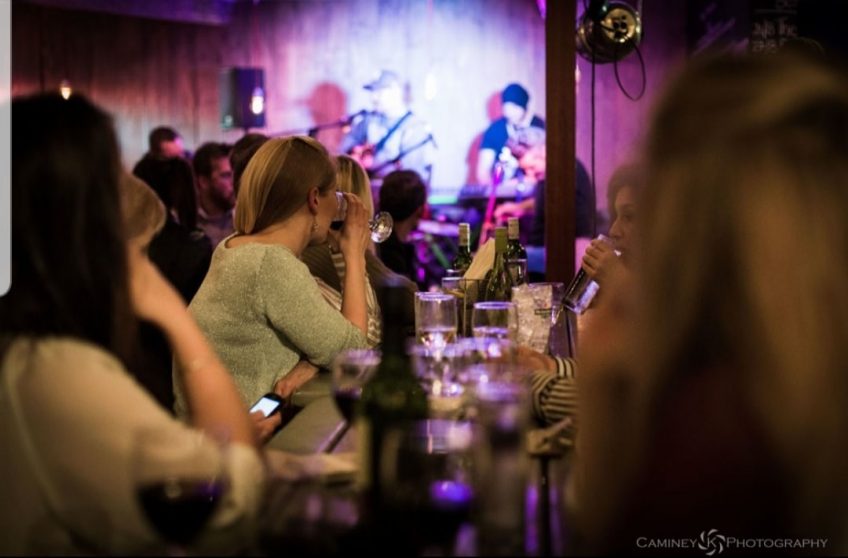 Nestled in the verdant Noordhoek Valley, Cafe Roux is an oasis of food, wine and good vibes that is well worth the drive from Cape Town. And if, not when, you drive the spectacular Chapman’s Peak Drive then this is the perfect final destination to set your sat nav too.  Cafe Roux to be fair is not exclusively a live music venue. It is a delightful restaurant in its own right, with a fresh and vibrant menu that reflects the nature that surrounds it. Its terrace is the epitome of calm, being leafy and sun dappled. It is designed for lazy afternoons of catch up conversations and mellow moments.  Instead the music here is an extension of the soul of the place, as dusk falls, the vibe changes and the music flows. The carefully curated line-up can include anything from rock to folk and from singer-songwriters to tribute acts, all with a performance tailored to the venue. There is something magical about the venue that brings out the best in acts who have the freedom to experiment with their muse.  It’s open seven days a week all year round and in winter there is a blazing fire and more intimate and unplugged gigs. 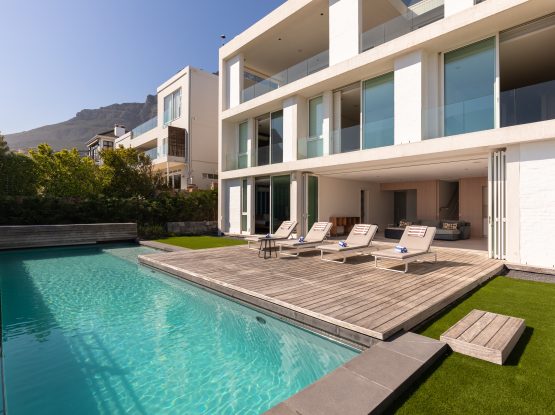 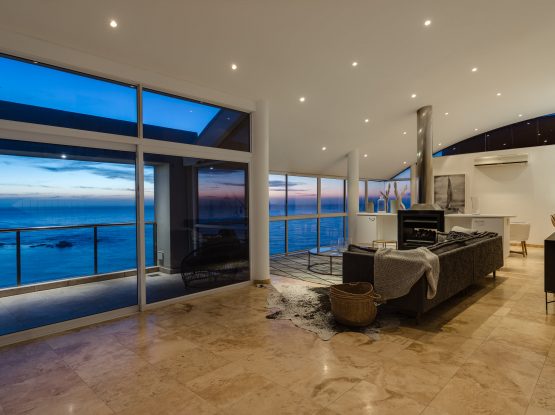